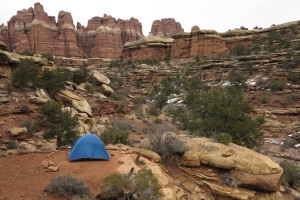 perhaps “art” is too strong of a word. i’d like to think we were sufficiently successful at tentooking (tent + cooking), but mastery of the craft is still beyond our grasp.

one surefire way to falter while cooking inside of one’s tent is summed up by one weep-worthy word: onions.

we like our daily dose of vegetables, so onions and “those tasteless squash things” (his words, not mine) were an integral component of our otherwise packaged dinners. i had the task of slicing onions; i wept. we turned on the mini stove, careful to keep all flammable items (i.e. everything) away from the stove’s meager yet mighty flame. the onions, although covered, began to sizzle and spat their crying juice into the dark, frozen air; we wept. consequently, we spent the next four and a half minutes (the approximate cooking time of an entire onion on a camping stove) alternating between wiping raw eyes, wincing, unzipping the tent door to gasp clean air, and re-zipping the tent door to keep from becoming a human popsicle.

that being said, we cooked with onion the next night too. (when it comes to onions, some people live and learn; we prefer to live and weep.)

a final tip is this: if you guess that your tongue will stick to the metal pot if you lick it, it’s a good assumption that it’s too cold to cook outside. (no, i didn’t lick anything, but it seems like a good rule of thumb.) i thought the juxtaposition of frigid air and hot mush would be complimentary, but it turns out that frozen fingers negate even the best intentions. cook inside. you’ll enjoy the oatmeal, and the feeling in your fingers, much better that way. 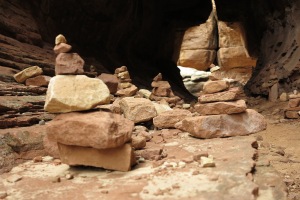 3 thoughts on “the art of tentooking”